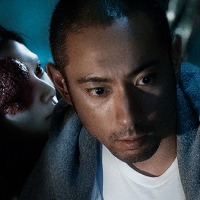 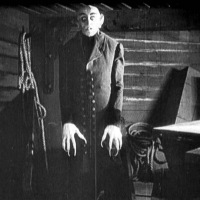 It is a liminal time of the year and a liminal day. It’s a time when the worlds bleed together and the monsters, ghosts and our beloved dead can slip through into our world and, sometimes, perhaps, we take a wrong turn on the back roads, knock on the wrong door, even go down into the basement and can wander into theirs. It happens at special times because the worlds are meant to be separate, or so the stories usually tell us. But it’s always difficult living in-between.

Nagabe’s The Girl From The Other Side starts as many fairy tales do, with a girl caught between worlds. Shiva appears to be a little girl about 6 years old. She was left in the woods by a woman she calls, “Auntie.” She is found by an adult she calls Teacher and they live, as many in fairy tales do, in a cozy house in the woods. One might even call their home a “cottage.” They have tea parties, take walks in the woods, try to bake things–Teacher is terrible at baking–and engage in other such idyllic cozy cottage in the woods pastimes. Shiva was abandoned in the forest, probably when humans fled her town or possibly after everyone else died. She lives with Teacher while she waits for her Auntie to come back for her. Teacher does not believe Auntie ever will, but he can’t bring himself to tell Shiva. 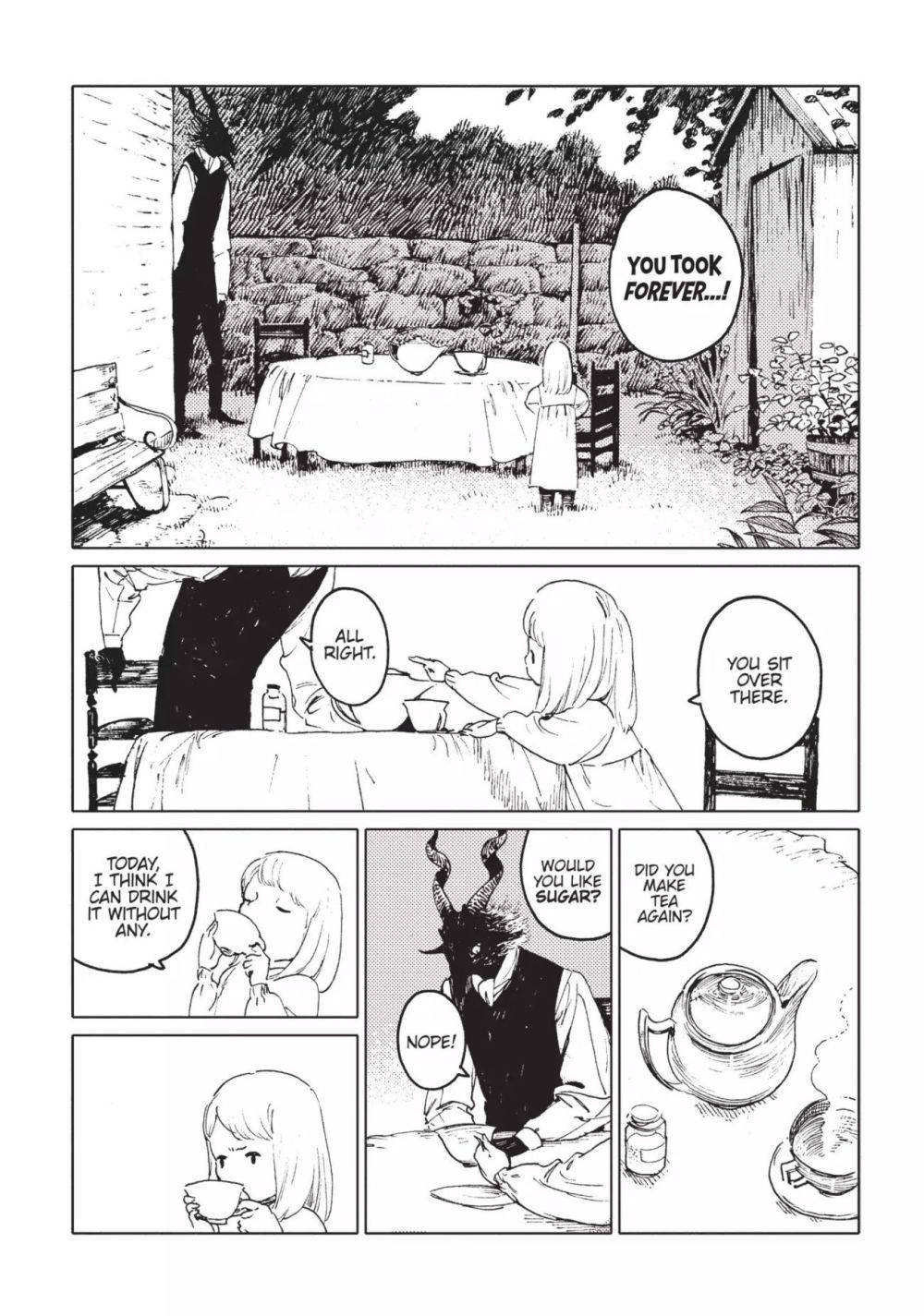 And because this is like a fairy tale, there are, of course, people who consider themselves heroes and things the heroes consider monsters. Their respective worlds are called the Inside and the Outside. Inside is the human world that must be protected and Outside is the world of monsters that Insiders believe must be destroyed. On the Inside are humans are protected by soldiers who serve the Holy Father, who himself serves God. On the Outside, are the cursed ones. The Outsiders have black fur, often with skulls for faces and horns. Some seem to have been transformed from animals like foxes and crows. They are apparently immortal. One has even been decapitated and his body carries his head around carefully protected with a sheet. What the Outsiders believe is more mysterious than what the people on the Inside do. Like most people, the Outsiders assume what must be done is obvious. And when they try to explain, they do not necessarily do so in easy to comprehend terms.

Shiva is on the wrong side of the world. She is a small human child on the Outside, living among the cursed. And the gentle, reserved Teacher–with his black fur, twisting tall horns and caprine ears–is an Outsider. Like all Outsiders, Teacher carries a curse that could transform Shiva into something like him with just a touch–even an accidental brushing of hands, even a hug. Teacher tells Shiva how to bandage her own cuts and check herself for signs of the curse–a creeping dulling of the sense of touch, smell and taste.  He would love to comfort her or treat her minor injuries, but he restrains himself.

Neither Shiva nor Teacher is wholly part of either world. They live in-between, on the bleeding margin of the Inside and the Outside.Their cottage in the woods already mixes the human and the natural. And they live not far from a town, but one that has been abandoned by humans and it is still too human for the Outsiders to inhabit. Teacher avoids contact with both Outsiders and humans as best he can. Both sides want Shiva for different reasons.

Shiva’s difference is obvious. She seems immune to the curse. She is the little girl in the woods living with a monster. Though she still appears human and can feel pain, be injured or become sick, Shiva’s own people on the Inside already consider her cursed. She is not human to them any longer. But she is not an Outsider either. Teacher does not consider her an Outsider. The Outsiders do not consider her one of them. They focus on her soul. But Teacher is unusual, too. He does not know the things the other Outsiders know. He still wears clothing as humans do, though his is very formal with a cravat, waistcoat and a long, black coat. And the Outsiders mark him as different.

The Outsiders are more obviously frightening than the people on the Inside. They live in the woods, with their motley physiognomy. Their touch can transform bodies. They look like Western demons. The Outsiders are hard to understand, even when they bother to explain what they are doing. They want to collect souls and they say that souls consumed first by the curse.  They talk to their Mother who lives at the bottom of a lake. And the Outsiders want Shiva.

The Inside seems very much like a European fairy tale world. But as in so many modern fairy tales, humans are ultimately much more frightening to me than the monsters. Soldiers destroy whole towns to save them from the curse. Soldiers kill people who haven’t even been touched because Insiders believe the worst part of becoming an Outsider is not the physical transformation, but the inability to die. And so the soldiers do their holy work of massacre.

Nagabe’s art is beautiful with deft fine lines and careful contrasts of black and white. I appreciate how much of the story is told with very little text.

Nagabe’s use of black and white subverts their traditional use in fairy tales–and far beyond fairy tales. Shiva is as white a as a character can be while still elegantly depicting a person with hair, facial features and clothing. Similarly, Teacher is rendered almost as a shadow, with as much black as can be used while still elegantly depicting a person with black fur, horns, coat, and trousers. He is a very refined devilish-looking person.

Nagabe uses but doesn’t reinforce the associations of these colors—white with purity, innocence, good. Black with corruption, wickedness and corruption. As the story progresses, Nagabe subverts these associations more and more. Shiva never becomes evil, but the humans in their white world become more and more frightening and genocidal. And the Outsiders become more comprehensible and less frightening. Though the story is very much told in black and white, The Girl From The Outside stays in-between, in the liminal space where the worlds bleed together, where we can meet people different from us, who might not be people as we understand “people” and to whom we might not be “people” at first, and where we can even love them.

Carol Borden thinks Teacher is exceptionally dapper. She read Nagabe’s The Girl From The Other Side: Siúil A Rún, vols. 1-5 (Seven Seas Entertainment) for this piece.

This essay was originally published by The Cultural Gutter on Nov. 1, 2018.