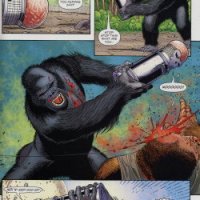 Everyone’s wearing a disguise (whether they know it or not) and knowing the players takes a lot more than simply reading the score cards. Maybe everyone’s got something to hide, but they’ve got something to reveal, too. Scratch the surface and explore what secrets lie beneath–it’s bound to cost someone…a lot.

My story “The Itch of Iron, The Pull of the Moon” is included in Drag Noir

, the third anthology in Fox Spirit Books’ Noir series edited by K.A. Laity. My stories appear in the first two, Weird Noir, and, Noir Carnival, as well. And, really, I couldn’t be more excited about this project. (And just look at the cover by S.L. Johnson. I love her work).

was released on Halloween and is available in paperback and digital form from Amazon.

You can read a bit of my story here.

Latonya Pennington has some nice words for “The Itch of Iron” in her review at Plenitude Magazine:

While those familiar with drag or noir won’t be shocked by the domineering sexual figures or tragedy, stories that mix noir with other genres were a pleasant surprise. “The Itch of Iron, the Pull of the Moon” features urban fantasy elements that involve a gender-bending fairy creature, humans, and werewolves. It’s fun and fresh and something that you can actually imagine happening in real life.

Here’s a bit from a nice review at Tony’s Thoughts:

This book could easily be considered subversive by encouraging lifestyles that are seen by some to be against their cultural norms. Good. This book made me think and challenge my own perceptions. I hope it does the same for you

You can get a sense of what this anthology is all about from the original call for submissions.

And here is the amazing cover.